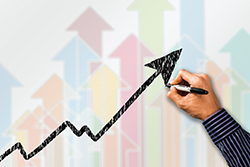 On balance, more companies saw profits stabilize or increase, but the overall size of the profit increase decreased again last year. This has primarily been caused by the strong increase in personnel costs. 27% of the total SME revenue was spent on staffing costs.

These are the findings of the new SRA report ‘Overview of Sectors in 2018: the hard data of Dutch companies’.

In 2017 the increase in personnel costs was measured at 8%. This compared less favorably to previous years (6% in 2016, 3% in 2015 and 2% in 2014). Salary costs increased by 9% (compared to almost 6% in 2016) and social insurance costs increased by 10% (6% in 2016). Salary costs increased in industry and healthcare especially, as relatively expensive personnel are present in these sectors. The hospitality sector is more focused on cheaper employees and has therefore limited the increase in costs. On balance the construction industry has seen a strong growth in personnel costs compared to other sectors.

In general, increasing personnel costs have ensured that SME profits have lagged behind the increase in revenue. The growing staff shortage means that we can expect these costs to continue to increase in 2018. Personnel costs do not only refer to employee salaries. Indirect costs must also be considered, especially the social insurance that employers are required to pay. Personnel costs form one of the most determining factors in the competitivity of companies. If salary costs continue to grow in 2018 without compensatory reductions in taxes and social insurance premiums, SMEs can expect the decrease in profitability to continue.

Financially speaking, the SME sector has had a good year. Solvability has improved significantly, and shareholder equity increased in total by 17.5%. The healthcare sector, industry, logistics and commercial service providers have all seen a strong growth in equity. The abolition of internal pensions probably also played a part because part of those pension provisions went to equity. On balance, short-term debts rose by 3%, indicative of additional investments being made. On balance, income and expenses decreased by almost 15%, due to the lower interest costs of loans.

In 2017 revenue growth was positive across all regions. The rankings were topped by Overijssel, Gelderland and Flevoland, with the Southern provinces of Zeeland, Noord-Brabant and Limburg collectively seeing a lesser increase in revenue. Profit figures in Limburg were good, due to a lower than average growth in company costs. Personnel costs increased most in Overijssel, Gelderland and Flevoland (+9%). In the four largest cities (+2,7%) the increases in personnel costs were remarkably small.

Recovery of industry and the automotive sector

Industry and the automotive sector displayed a remarkable and convincing recovery in 2017. Construction continues to perform well, with a revenue growth that accelerated to 12.7%. Profits slowed down, but they are still above average. The healthcare sector also had a good year. Companies in logistics saw a slowdown in revenue, but their profitability improved strongly. The retail sector and specialist service providers clearly lagged behind.